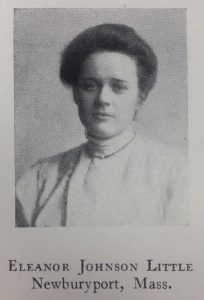 Eleanor Little, Class of 1907, kept many invitations and programs in her memorabilia book. With her dance card from the Freshman Frolic she could be a background character in “My Freshman Crush”. Many programs and event cards in her memorabilia book are accompanied by notes about who took or invited her. Her only direct mention of crushes, however, appears in a letter to her mother about her friends:

We are having such a queer time now with the girls.  Several of our friends have gotten into entanglements which are causing both them and us a great deal of worry and annoyance.  The heart to heart talks, and the good advice that we sane people have lavished on our temporarily insane friends yesterday would fill a volume.  It is hard to explain in a letter, but it is about crushes (if you choose to look at them that way.) There is one case that I have prayed over, and what the end will be God only knows.  It is not a crush, it is something far too serious and heart-rending for that.

Eleanor’s letter demonstrates the tendency to distance one’s self from students who got crushes – she defines herself as one of “we sane people” – but also the fact that students who were crushing were not social pariahs – simply “temporarily insane friends”. Her casual use of the word crush demonstrates that her mother already knows what it means. The letter also reveals the potential for an interpersonal “entanglement” to advance into something more “serious and heart-rending” than a crush.

Eleanor attended many student-run plays while at Smith, which were known as “Dramatics.” Smith students solved the issue of plays with male characters by dressing in male costumes. When President Seelye attempted to ban the practice in the 1870s, students compromised by dressing like men from the waist up and hiding their skirts behind various objects on stage. By 1907, students had thrown caution to the wind, and dressed in pants, beards mustaches when playing male characters. Dramatics served as an avenue to explore same-sex desire: in one letter to her sister Jo, Eleanor mused:

I went to the Hubbard House play last night.  It was An American Citisen [sic] and was very funny.  One of the girls, who took the part of the hero, was so good-looking that all the girls fell in love with him, or should I say her.

Photograph of Vassar students from: Horowitz, Helen Lefkowitz (1993). Alma Mater: Design and Experience in the Women’s Colleges from their Nineteenth-Century Beginnings to the 1930s. Amherst: University of Massachusetts Press. ISBN 0-87023-869-8.