“From a Freshman’s Diary”

A 1906 story in the Smith College Monthly tells the story of a first-year who develops a crush on an older student, Alice, who also happens to be romantically involved with the narrator’s older brother. In the first half of the story, the narrator slowly admits to herself that she has a crush on Alice:

Sunday the 5th….Alice–she insists I call her Alice, though I hardly dare–asked me to dinner again to-day….However, I don’t think she cares a straw for me.  I am almost positive she is engaged to Brother, or could be if she wanted to….I almost wish she didn’t know Brother, and then I’d be sure she liked me for myself.  As for my feelings toward her–well, I can only say that I don’t blame Brother. If I were one of those who were susceptible to such things, I suppose I’d have a “crush” by this time.  Thank goodness I’m not.

Tuesday the 7th.–I met Alice downtown to-day.  She is the nicest, dearest girl I ever saw….That sounds a little ‘dime-novelish’, but I mean it seriously. She’s my ideal of a girl.

If anyone should read this–any college girl I mean–she’d accuse me of having that which I consider so silly–something which begins with a ‘c’.

Monday, the 13th.–She kissed me to-day! Why is it people put down in their diaries the things they couldn’t forget if they tried?

Wednesday the 15th.–In spite of all I’ve said and felt and thought, I must admit it.  I have what they call a ‘crush’. At least, I seem to show all the symptoms which distinguish one.  If so, a real one is a much more serious affair than would appear to the casual observer….Altogether I think I must confess myself a victim of the freshman malady.  In theory I do not approve, but practically I can’t help it. As I’ve said before, this feeling is not a silly one by any means. I do love Alice dearly, and I don’t see why I shouldn’t say so.  She is the dearest, truest girl I’ve ever known.

The story takes a turn when the protagonist, standing next to an Amherst man who often comes to call on Alice, sees her kissing another man:

Wednesday, the 29th….I went over to Alice’s this evening, and as I was walking up the path Alice herself opened the door and stood in the light. There was a man standing by her and he was putting on his long coat. When he got it on, Alice put her hands on his shoulders and–kissed–him!

Alice! Who is engaged to my brother! I gave a cry and then I realized that there was someone beside me in the path who also saw. He said something too, for it was that Amherst man.

The conflicted protagonist expresses, “I feel so badly for Brother and I feel almost worse for myself.” After much internal debate, she writes her brother and tells him what happened, and decides to tell Alice that she did so. Yet somehow the story resolves comically:

Sunday, the 9th.–I shall never be able to look Alice in the face again, or Brother either! though Alice was dear to me.

She considers it the best joke she ever knew. I don’t.

I am too mortified to write down the details, but this is what I telegraphed Brother at once:

“Mistake. It was a girl dressed up for a play.”

This story holds several elements of great interest: First, the protagonist sees no moral conflict in having a crush on her brother’s fiancee, or with Alice kissing a girl; neither threatens Alice’s engagement. Second, throughout the story the protagonist places herself physically and metaphorically beside Alice’s romantic interests: she stands besides the Amherst man and reacts similarly to him; her feelings for Alice shadow her brother’s. And third, the story exposes the Smith habit of playing with gender and same-sex attraction through theatrics and male costumes. 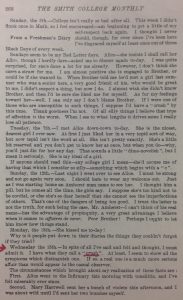 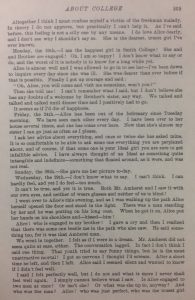 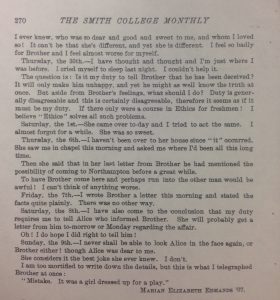