A 1904 “sketch” in the Smith College Monthly incorporated some Smith slang in a humorous second-person narrative, including “crush”:

The Freshman Next Door told you what a “crush” was. A “crush” was a person whom you could give flowers to, and whom you could tell your best friend how much you adored. Every Freshman must have one….There was a very nice girl, a junior, who called you “my dear”, so you told the Freshman next door that you had a “crush”.

The narrative is framed by several conversations with the main character’s aunt and uncle. The story begins by saying that “when your aunt said college life was unnatural, you wondered why. Then you were a Freshman; now you are a Junior, and you remember lots of things.” After a semester at Smith, when the protagonist gains a crush, she goes home for Christmas. “Then it was when you told your aunt about your ‘crush’, that she said that the life was unnatural. Then it was that you addressed a young man as ‘my dear,’ and were so mortified when you remembered he was not a girl.”

This story is not the first appearance of fears of “unnatural” happenings at women’s college, but it is an early instance of linking the “unnatural” to crushes. But the story itself takes no position, and the aunt and uncle characters could be interpreted as out of touch. 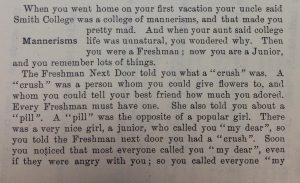 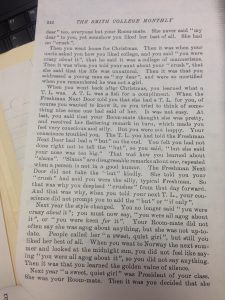