A 1895 piece in the Smith College Monthly, called “My Freshman Crush,” tells the story of a sophomore who attends the Freshman Frolic, an event where sophomores would act as freshmen’s dates and dance partners. In the story, the narrator flirts with a freshman and thinks she has secured a “crush” – until someone informs her that she was actually talking to a senior! While this story ends in comedy and a foiled relationship, its plot and publication show that crushes were an ordinary and publicly acceptable part of college life. (Click photos to enlarge) 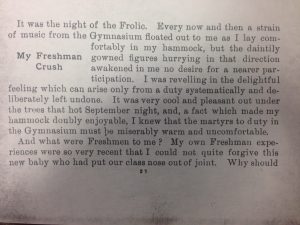 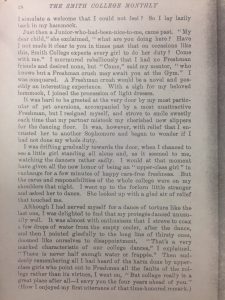 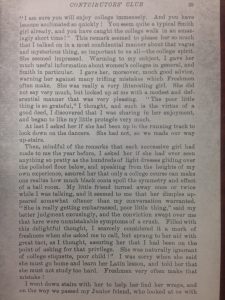 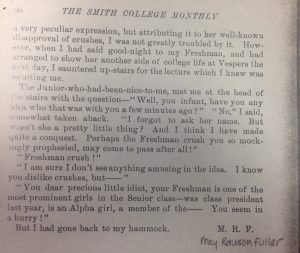 The sophomore is drawn in by the sarcastic speculation, “who knows but a Freshman crush may await you at the Gym.” She reflects that “A Freshman crush would be a novel and possibly interesting experience.”

The scene where the narrator flirts with someone she thinks is a freshman is particularly telling:

Then, mindful of the remarks that each successive girl had made to me the year before, I asked her if she had ever seen anything so pretty as the hundreds of light dresses gliding over the polished floor below, and speaking from the heights of my own experience, assured her that only a college course can make one realize how much black coats spoil the symmetry and effect of a ball room. My little friend turned away once or twice while I was talking, and it seemed to me that her dimples appeared somewhat oftener than my conversation warranted….the conviction swept over me that here were unmistakable symptoms of a crush.

Freed by the ultimate comedic reveal which nullifies the potentially romantic nature of this interaction, the writer feels comfortable asserting the superiority of a college experience without men, and exploring flirtation between two women.